The four soldiers held their breaths and crouched, squinting against the deafening blow of poisonous steam. As the vapor started dissipating they rose to their feet in a swift coordinated movement and ran to the castle’s narrower passageways.


The ground shook when the beast made its way in, leaving skin, scales and stone behind.


A deep silence fell upon them. Alanas looked at his men; Ehkart, his second in command, had an intent look in his face; Tkhur nodded, ready for orders; Liyas looked incessantly at all directions, wide eyed. Alanas sighed.

Tkhur elbowed Liyas in the rib and Alanas signaled them to the stairs that lead to the cave below the castle. Ehkart frowned, making the kings sign with his hands. Alanas touched his sword handle, nodding towards it. Ehkart’s eyes narrowed, gazing towards the destruction from where they had come he assented.

The beast’s stench seized their attention. Acting by instinct they all plunged to the floor, feeling the heat right above them.

Tkhur quickly put out the fire on his coat while Liyas coughed, “The damned thing is too close sir!”


With a hard look to his protégé Alanas sprinted down the corridor toward the king and his people’s hiding, followed by what remained of his battalion.


They arrived at a large cavern of more than fifty feet high, with stalactites and stalagmites the size of three warriors, fallen rocks and pools of dripping water untouched by living beings. Turning right, they crossed the cave’s main chamber as fast and silently as they could, heading to the labyrinth below, hoping that it would accomplish what the solid castle walls weren’t able to.


Taking his gem out, Ehkart signaled to the captain, “Have you any news sir?”
Blowing at his own gem Alanas replied, “Nothing yet. If Ehkord failed I’m afraid I'll have brought doom to our people.”


The other two mimicked them, making the cave’s large corridor shine blue. They all placed their stones on their left shoulders and passed their hands over it to lower the light.


"Damned be dragon's hearing. Even after death it's good enough to track us down," said Ehkart.


"It can hear us all right," Alanas said, "but I doubt its understanding of sounds is the same as when it was alive. We wouldn't have survived this long."


The others waited, knowing that a strategy was forming in their captain's mind.


"We'll keep on with the sign language, but we'll make noise with our bodies. The cave's echoes should confuse it."


Alanas guided his men swiftly in a wide curve toward the cave’s main entry. He made many twists and turns, climbing up and down slippery wholes, passing by narrow passages that allowed one man at the time walking sideways, crawling beneath solid rocks the size of a room, running through larger spaces, reducing speed only when the cave demanded him to.


They were far ahead when the dragon squeezed itself out, to the cave's main chamber. Its frustrated howl shook the cave’s structure, being heard by the group of four, and died in a whimpering sound.


They almost lost their balance at the beast first thrust in the cave's narrow passages. In the second, they heard rock falling at distance. There was a silence and the air temperature raised. Everyone covered their mouths and noses when Liyas coughed, although the dragon was still at safe distance.


He wiped the blood off his mouth in his jacket, looking wide eyed at Alanas. He wouldn't last much.


Soon after, they found a minor chamber cooled by a small subterranean stream, where they drank avidly and set to rest chewing slowly their remaining rations. They put out all but one gem and talked with their hands through the deep blue of Tkhur's gem.


“The clean water might be a light of hope for Liyas,” signaled Ehkart, “but his poisoning is too advanced to be sure.”


“Yes,” said Alanas, “we must find a way of taking him to the healers. Our regular potions won’t hold him long.”

“We might have to split up sir,” suggested Ehkart.


Alanas nodded. "Tkhur will take Liyas to the healers and give word to the king."
Tkhur frowned but signaled positively. He didn’t like the idea of leaving only two men two fight the monster that had killed every soul who had dared defying it, although he would not question his leader's wisdom.


The thundering sound was coming closer, too soon. Alanas stood up to leave when Tkhur’s gem went out. A shuffling sound followed as Alanas and Ehkart picked their stones and blew on them. No light.


“It seems that the beast’s master followed it from the grave,” Alanas said aloud. “You must send word to the king personally Tkhur. No communication from now own, we can’t take any chances. Let’s hope that we all are blessed enough to meet our goals. Go.”


Tkhur made a silent salute and went his way, passing Liyas arm over his shoulder and supporting him by the waist. Alanas grabbed his second man’s forearm; they looked grimly at each other in the dark. 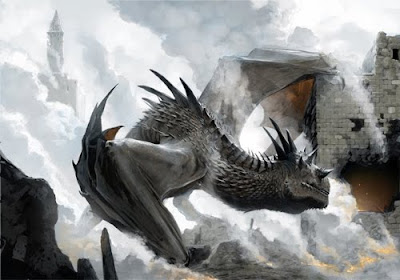 Note1: This story was inspired by Lena, at Informally Yours and Fictious Flashes, who suggested we both wrote a flash fiction on zombie dragons after reading my #FridayFlash debut, Zombie Walk. Having become fond of writing challenges I accepted this one with earnest. I suggest you stop by her blog and see her own vision of this dreadful monster. ;)

Note2: I found that breath taking illustration here, where you'll find many other dragon awesomenesses, including an actual zombie dragon! I chose to adapt this image, although the dragon in it doesn't look too much like a zombie, because it was too fitting for my story. ;)