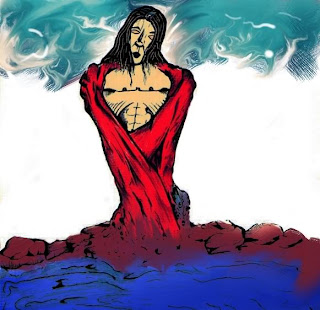 "I'm sorry to say this, but you don't look much like an angel," said Helen apologetically. "I hope you won't be offended."

Oscar smiled warmly. "Don't worry, your reaction is normal." Pointing behind her he added, "See that light? Who besides an angel of death could show it to you?"
"Oh."
This is when realization hit and Helen noticed her surroundings. They were seated on... nothing. There was no floor, no sky, no color -- not even white or black or something in between --no fog, nothing she could associate or make an analogy with. Yet, it felt solid and safe under her.
"Look," said Oscar, pointing down.
Between her dangling feet, she could see her own body laid on the coroner's table, who was going through the initial stages of the autopsy, talking to a small voice recorder about the external aspect of her shell. He opened her eye, making a verbal note.
She gaped, "My eyes, they look just like yours!"
"Yes," replied Oscar.
"I don't understand, this must be a dream," she mumbled, "Not a good one though."
Oscar smiled broadly and said, shaking his head, "Indeed, death feels much like a weird dream."
She looked at him with hopeless eyes, which were drawn to the open wound in his head.
"I'm sorry if my appearance is disappointing to you, but I assure you that the light right behind you is the real thing."
She looked over her shoulder, still curious. Momentarily forgetting about her companion's appearance she asked, "So the accident was real too? Not a bad dream?"
Oscar motioned negatively.
"What now then?"
"There's the light," he said, nodding to its direction.
"Are you coming with me?"
"Oh, no, I can't cross," he said softly, "I'll just keep you company until you're able to let go."
"Ah."
She looked down once more. This time she saw her funeral, filled with friends and family. She felt bad about the emotional distance with which she saw her daughters and her husband weeping for her, or for the pain her absence caused.
Helen sat there, reviewing her life backwards, unaware of the patient and silent man beside her. When all that was left was her own feet to watch and she had given them a good look, she got up in the nothing where they sat, being followed by Oscar.
As they walked she looked at him sideways, thinking that he should have been a gorgeous man when he was alive. He had a muscular body under the straps he wore and nice brown hair that was once accompanied by candid eyes. She wondered how could an undead be a death angel. Angels are angels, she thought, zombies shouldn't do their work. It feels unnatural.
"Don't be shy," said Oscar guessing her thoughts, "you can ask me as many questions as you like. I'm here for you."
"I'm sorry, I didn't mean to stare."
"It's quite all right." He smiled his warm smile again, making her heart beat faster.
"Why do I feel my heart beating if I'm dead?" she asked.
He raised his eyebrows but kept walking.
"It's a mental trick to make the transition less traumatic. After reaching the other side you'll be free from all bodily sensations."
"You know this by experience?"
He cleared his throat, "Not really, no."
Although she felt embarrassed, she believed all this was a dream. If it was the real thing though... She didn't really believe in it and she was too curious to hold herself.
"Might I ask how come you're an angel? I mean, you're supposed to be cursed right?" Realizing how offensive what she said could be, she amended, "Err, no offense."
"Non taken. I am what you said. That's why I don't get to cross over."
He silenced, gazing ahead at the beam of light. Helen kept walking quietly; she noticed that even his dead eyes conveyed sadness, and something else she couldn't identify.
"I'm a great exception," he continued, "I was tainted against my will. Since I was to become an angel of death anyway, they offered me this position here in between, as means of redemption."
"I see. Is this a hard job, being a death angel?"
"Not for me. Since I am unable to reach the other realms, I get the easier cases." He grinned.
"Do you know how long this redemption of yours will take?"
He shrugged.
"It must feel like the eternity."
"There is no today, no tomorrow, no expectations here, so time is free to leave us alone."
"I'm not sure I understand."
"You don't have to," said Oscar. "Where you're going to it's all meaningless."
"All of it?" she asked, fighting the knot on her throat.
"No, not your life. Just the illusions."
She opened her mouth to speak when he motioned ahead, "We're here."
Helen was surrounded by the brightest light she had ever seen. It didn't hurt her eyes though, it felt warm and comforting. She felt lightheaded and looked back to see Oscar waving and wearing a broad smile.
"Wait, I'm not--"
She didn't know how, but she understood his unsaid words, "Yes you are."
*
Note: I found this amazing illustration on photobucket. On the same search this odd one came up. Uh? Just a curiosity, heh.
Posted by Mari at 6:36 PM