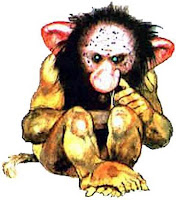 This is the 19th installment of the Troll Serial. To read from the beginning, or to find past and future installments, click here.

“Who’s your family?” asked Aimee in her gentlest tone.

Kratan didn’t elaborate, so Aimee made a pause to reflect on that information. So Kutril was family? How would a troll family be? Considering that neither Kutril nor Kratan were ordinary trolls, their family shouldn’t be either. Kratan kept staring at nothing so she peeked at the deep cave through the fire light again. The chambers looked like rooms, if you considered the possibility of a troll family. There were two entries at one side, and two larger ones at the other. She’d have a look when she would be able to walk again.

Kratan grumbled something as if he was reliving old memories. He shook his head and hit himself with his fists.
“What’s happening?” coached Aimee.

“What does she have?”

“She’s hurting… dad’s not here… No! Don’t hurt Kutril! No, no!” Kratan shook violently, tears running free down his cheek.

“Kratan?” said Aimee, with a knot in her throat.

“He’s out for help, but mummy’s nails are so big… She’s hurting Kutril. Stop, mom! Why is she laughing so hard?” Kratan wailed and rocked, scratching and banging his head alternately on the wall.

“She’s gone and Kutril is hurt. Must get some bandages.” Kratan stood and hushed to one of the larger chambers. Aimee saw him carry an armful of bandages to one of the small ones. He stayed there for a long time and she dozed off.

She woke up with someone sniffing at her. “Hmm, time for a snack,” said Kratan with his evilest grin.

Aimee started and grunted in pain. She stayed very still while he frowned at the scent of herbs and turned to the half-cooked body by the fire. He took an arm off and threw at her. She squeaked and looked up in horror.

“This has been too close to the fire. Why don’t you have a bite?” His mouth twitched between amusement and disgust. She shook her head, tears threatening to come out. “I agree this is not as pleasant as fresh food, but I can’t waste it, can I?” She pressed her lips together so no sound would come out. “Or maybe I should start off with you?” He smiled widely at her, but didn’t move. She tried not to stare at him while he fed and resumed their conversation, to see if she would be able to extract more information.

“Do you know where your mom is?” Kratan stopped mid-bite and looked wide eyed at her. She cringed internally at his reaction but managed to maintain a neutral face.

“Mother is dead,” he replied neutrally between bites. “She’s been for a long time now.”

“What about your father?” Aimee’s breaths came out in shallow gasps, but she couldn’t let this opportunity pass.

“Oh, the old fart is pretty much alive. He’s giving me so many playing opportunities!” While he laughed there was a flicker of light in his eyes and he shook his head. His voice came out deeper this time, “Too bad I couldn’t finish him off on our last encounter.”

“What about Kutril? Don’t you miss him?”

Kratan dove into his mind again, dropping his food. At some point the fruits Aimee ate gave signal of having worked through her system. She didn’t remember having used the bathroom ever since she was captured; how long has it been? Maybe it was only now that her body was recovering from the shock. Kratan’s herbs must be working.

Kratan was crouched with his head firmly set between his knees, his hands protectively put above his head. “Kratan?” No response. “Kratan, I need to… I need to pee.” Aimee blushed violently, but the troll didn’t look up. “Is there a bathroom here?” He pointed to the small chamber in the farthest corner. She sighed in relief, not wanting to imagine what the other Kratan would do. Aimee tried to get up, but the pain was too much for her. “I can’t… I can’t walk.”

Kratan stood up with veiled eyes and gingerly carried her to the bathroom. He left her there to balance herself in the darkness in front of the large gully. She thanked Holy Mary for its existence and for the old wooden cover that creaked loudly when she closed it with no little effort. She realized that she hadn’t prayed a single time these days, and chastised herself mentally for such negligence. Slowly, she limped out to see no Kratan to take her back. The fire light wasn’t strong enough for her to see where she was stepping so she bumped her naked feet on rocks and slumps, her right hand supporting her weight on the back wall. After a few steps she stopped, panting, and slid down the murky wall. She joined her hands together and prayed for help, for Kratan and his family, and for her own. The tears’ warmth contrasted with her body’s shivering cold.