Are you debating with yourself whether Amazon's policy is fair, whether the current system for book publishing works or not? Well, there's a new publishing house proposing quite an alternative for the publishing market: not only they don't care about the mainstream publishing but also they run away from it.


Did I get your attention? Good! Please meet Randomities' honorable guest, Dan Holloway, curator of the newly born eight cut gallery press and a writer to whom 'underground' is like a middle name.

Dan Holloway is a founder member of Year Zero Writers, and curator of eight cuts gallery and eight cuts gallery press. His articles on publishing, short stories, poems, music and poetry reviews, and papers on post-communist Europe have appeared in print and across the blogosphere. He is the author of the novel Songs from the Other Side of the Wall, and the collection of stories and poems (life:) razorblades included (left), both available from his website.

*
Mari: Welcome to Randomities Dan! Please tell our readers how the eight cuts gallery press came to be and what's its philosophy and main goal. I'm also curious about the name.


Dan: Thank you so much for inviting me here. eight cuts gallery press is one part of eight cuts gallery. The idea had been building after I blogged last year about the need for literature to have more curators prepared to get excited and whip up some hoopla about the great writers who are out there. As time has gone on and no one seems to have filled the role, I decided I’d throw my hat into the ring.


The goal is simple – to get people excited about great writing. The philosophy is equally simple – there’s great writing out there you don’t know exists, and you should. Not by making it conform to the traditional preconceptions of what stories and books are, but by putting it out there in whatever shape it wants to take and selling the public a ringside seat.


And an integral part now is the Chris Al-Aswad Prize http://eightcuts.wordpress.com/eight-cuts-prize/ for outstanding contribution to breaking down barriers in the arts, named in honour of an amazing guy who was the vision behind www.escapeintolife.com.


In terms of the press, I think it’s a model that can work for alternative or underground works. There were also very specific books I really wanted to get behind, and that spurred me into doing something now.


Mari: The pleasure is ours, mine and the readers'. :)

Please tell us, is there a special meaning for the gallery and the press' name? How did you come up with "eight cuts"?


Dan: Sorry, I completely missed that bit! I have no idea where the eight cuts bit came from. I spent a couple of months trying to make it mean something deep but failed miserably. The gallery bit is partly to get across the crossover with art, and a new way of doing things for literature, and partly to make people think of Six Gallery where the Beat Poets gave their famous reading.


Mari: You have a rather unusual approach to several aspects of the publishing market. For instance, you don't attach an ISBN to the paper books. Is there a particular reason for that approach?


Dan: The main reason is to ensure I can control distribution. I want to avoid our books being sold on Amazon or in the big chains if I can. It means more for the kind of books we publish to work with a small group of carefully selected outlets – to build relationships with them, and with our readers direct.


And I honestly don’t understand ISBNs. No one has been able to come up with a good reason for why the book business distributes as it does other than “just because”.


Mari: Well, it seems to be standard to the publishing market. I wonder if not having an ISBN could hurt the company's and maybe even the author's credibility.


Mari: Another distinctive approach is on the financial aspect of the business. On your website you say:
1) you'll take no money from sales;
2) you'll not retain any rights;
3) you'll split 60% of the company's profits with the participating artists;
4) you'll take royalties from the authors only in case of long and shortlisting for major literary awards.
This sounds like a pretty revolutionary system to me, in which the author is practically a business partner. Did I get it right, is this where you're heading?


Dan: Good lord, no – I wouldn’t want authors to share the bad bits of running a business. It’s more like a movie where people get paid on profit-share.


1. Yes, except where we have had to pay for marketing costs with prizes (it’s a condition with the Booker, for example, if you get shortlisted).
2. Absolutely
3. This refers to eight cuts gallery, as opposed to the press. This is the part of the project where I may make money personally by building the brand, holding live shows, selling merch. The press is only part of the whole, remember.
4. We won't be charging royalties - instead of passing on 100% of the profit, the author gets 50% of the profit, until we have recouped.


Mari: Please tell us how your submission process works. What are you looking for and how should writers submit to you? Should they send queries, synopsis, fulls? Can they send by post or only electronically?


Dan: Our full submissions info is at http://eightcuts.wordpress.com/collaborate/submissions.


The long and the short is that we take submissions electronically but there is no prescribed format – whatever the writer thinks shows their work off best.


Mari: Please tell us a bit about Charcoal and The Dead Beat, the first books that are coming up through eight cuts gallery press this year (2010). What makes them a fit for eight cuts in your view?


Dan: It’s very hard to say what an eight cuts book is like without using all kinds of categories that don’t really apply. I guess urban is a word that would apply. And both are rich, complex, but written in great language. Most of all, they are deeply serious book in the sense that each author has tried to convey some deep sense of personal truth through them, and that’s something I really believe in (http://yearzerowriters.wordpress.com/2010/03/06/confessional-art/).


Ah, no wait, I think I have it. It’s what they have in common with my last book (which I will bring out through eight cuts). For all much of their subject matter is death, they are actually books about life.


Mari: Here are the tidbits Dan shared about the eight cut's first releases. You can read the first chapters of both books on their website. Thank you for being here Dan, and for your insightful and straight forward answers. Much success with your new venture!
Charcoal, by Oli Johns

“Apparently there are three popular ways to kill yourself in Hong Kong.
Throw yourself off a building.
Hang yourself.
Burn charcoal in a sealed room.”
Oli can’t stop reading Deleuze, only it doesn’t seem to make any sense. And he can’t stop thinking about suicide. And Camus. And that sort of makes sense. But only sort of. And then he meets a seventeen year-old girl on the internet and they meet regularly for mindless sex. Only it’s not enough to stop the anxiety. And the obsession with suicide, although he knows he’ll never kill himself. And then there was that Korean model, the one who killed herself in Paris. And that writer, the one he met online. The one who said she’d tried to kill herself three times. The one who wrote that book…
The Dead Beat, by Cody James 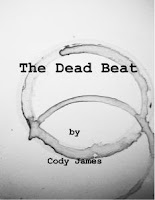 It’s 1997, and the comet of the century is due some time about now, on its 3000 year roundtrip.
“Man, fucking Emeryville,” Lincoln said, pausing in his stride to hock phlegm onto the sidewalk.”
And so, for want of anything better to do, Adam and his meth addict friends end up in San Francisco, wondering where their place in the addict hierarchy might be, why no one has written a good book in over a decade, and what the fuck the comet might mean, when nothing on earth means anything.
And in a zip of light and a snort of meth the comet is gone, taking with it this last snapshot of earth for 3000 years, leaving Adam to wonder if it meant anything at all, or whether it was maybe just a bit cool that the sky looked different. Just for once. For the last time in his life.


Note: The photo above is supposed to be of the Six Gallery reading mentioned by Dan, although the website where I found it don't state its credits. Nevertheless, the article that goes with it is rather educating.
Posted by Mari at 12:09 AM