It's time to collect the rewards!


My first knight to shine at Randomities is the lovely Cathy Webster, whose blog Life on the Muskoka River features not only her wonderful stories but also funny and curious life anecdotes.

During Cathy's Week you'll read an interview with her (below) and a story featuring no one less than herself!


Now, since this is the first knight interview, I think some explanation is in order. I've send a bunch of questions to all interviewees, the same to everyone. Since there were too many to post in a single interview, I chose the ones which answers I liked the best. This means that in future interviews you might find repeated questions or not. So each interview will be a surprise for you and the interviewee. *grin*


Additionally, the stories that I wrote based on the collected information are also a surprise to the subjects of my inspiration. *wicked grin*


Now, I'll let Cathy speak. My throat is sour of too much babbling, and my face hurts.


2. What else is a favorite to you that you feel is relevant?


James Durbin is my favourite contestant so far on American Idol. Dexter is the coolest show on TV but I miss Tony Soprano (I was in love with him - love, I tell you). I love my convertible and I love my laptop (MacBook Pro) and I love living "up north" on the river. I do not love dishes.


Someone breaking in the house when I'm here by myself. Something horrible happening to my husband or my children. Losing my mother. Being in a car accident. Being eaten by a bear while we're camping… there are so many. I am SUCH a chickenshit!
4.     What do you do for a living, besides writing?


I've worked for newspapers all my adult life; for 20 years as a reporter/photographer and then editor; since then as a graphic artist.


Because I suck at math.


Rolling Stone magazine. When I was in my early 20s I really took a shine to the honest, detailed, well-crafted writing being done by the mag's feature writers. Incredible stories. Their tone, their dedication to original, accurate writing clicked something in me that made me want to write like that.


The thing I learned about being a reporter is there is no best time to write. I had to write several stories every day and I had to write them in between covering other events. It didn't matter if it was 8 o'clock at night or 6 a.m.; didn't matter if I was sick as a dog; I had to write every chance I got. The very best time to write was as soon as you returned from an interview. Write when the idea, the information, is fresh - that freshness will show in the writing. If the info is stale, your story will be boring and, um, stale.


I don't do drafts. I write it once, editing as I go. Then I read it out loud to my husband, to see how it sounds (I find a ton of mistakes that way), I do a spell check, and then I send it out. Yes, I know rewriting would make a more polished story… well, I think it would. But, again, newspapers don't allow you the luxury of rewrites. You write it. You send it. And then you're on to the next thing. I honestly think spending too long on one story will make it mediocre. It takes all the 'you' out of it. But you know what? I am certainly no expert. In competitive contests, my work rarely is chosen and I've never been published. Maybe if I did rewrites, that would change… however, I rarely submit anything, either. (Rejection is another big fear.)


Slice of life. Anything that illuminates the human condition.


10.   Which is the favorite character you've ever wrote? Why?


I like the old ladies in Why Mabel Stopped Going to Church. Mabel and Olive are the only characters I've written about in more than one story. I also really like Gretal Hoffenmeir  because she was just crazy and funny and well, crazy. And I really liked Stinky, I CAN'T CHOOSE! Those guys are all crazy...  but I also have a soft spot for a sad cook named Olezhka; Bella, a woman who loses her children (based on a true family story). And I liked Gordon Kilbride, too, a widower who returns to the ghost town that was once his home. Sorry, Mari!


11.   If you were to be written as a character in a story, which genre would you like the story to be?


Meh.. doesn't matter. Humour, I guess. Anything but science fiction.


12.   Would you like to have any special trait, ability?


13.   Is there anything, any kind of being, you'd like to see in a story featuring you, or the character of your choice?


A river. There has to be a river. 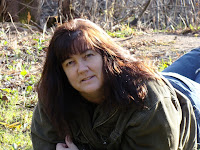 Cathy Webster lives on the sunshiny banks of the Muskoka River near Bracebridge, Ontario, Canada. She shares her rustic, 131-year-old log cabin with her new husband, Dave, two good-looking sons, two cats, one smallish dog and some squirrels in the attic. When she's not blogging at Life on the Muskoka River or coveting her new Kindle, she's designing magazines, camping at one of Ontario's gorgeous provincial parks, or fishing on the riverbank. Some day she thinks she might try writing a novel. Some day ... but you're not holding your breath, are you?
Posted by Mari at 5:26 PM