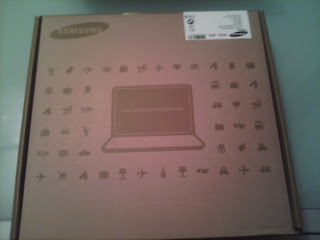 Yessss. After a long wait the shiny new computer has arrived! YAY! :D
Actually, *ahem*, I have to confess something. It has been a few days since it's arrived but it's been crazy these days! Sorry? *doggie face*
Anyway, I think you can imagine my excitement when I saw that slim box up there. :D
As you must have noticed, I've purchased a Samsung. It's a netbook with 1G of run memory and 250G of storage. If you're curious about the technicals, give it a google to "N150-JP02", which is the CP's model. ;)
Red, who has been extremely helpful and incredibly available throughout the buying process, suggested me better machines to buy as well. But I had a limited budget (not wanting to take advantage of my dear writing pals) and I had to buy here in Italy (thus paying in euros) because no seller would ship it here. (boo!) So I settled for a good computer, not an outstanding one.
"Who's this Red you're talking about?" you ask.
He's the tech-savvy friend John Wiswell introduced to me to give advice on the deal. He was fundamental! Thanks so much, Red!
Now, knight-Red, who's always drunk but drinks only water, has been playing at Devian Art for a while. I'd suggest you take a look at his work. His characters have loads of attitude!
And now, *drum roll*, I present you my shiny new computer!


Yeah, I was hurting a bit when I had to go for a yellow computer, but when it arrived, I couldn't be happier. I looks much better in person that on picture. Believe me. ;)


Also, since I went for a cheaper option (although very satisfying, I cannot stress enough) I could get a few useful accessories as well, like the cool yellow mini-mouse that matches the computer's color perfectly, the bag for carrying it safely, and a white mini hub with four exits that I'm sure I'd regret not buying.


Now, I'm as tired as you must be of reading "thank you" all over  Randomities, so I'll start acting instead of yakking about it. Which means that next week will be Cathy Webster's Week! Woot!


Come back Tuesday for her interview, and read her story next Friday. See you then? :)


Note: If you don't know what I'm talking about, read the last paragraphs of this post.