This is my first attempt of #FridayFlash. This is also my first horror story, and my first zombie story as well. Contrarily to what you might think, I don't like Zombies. I've set a challenge to myself to write something zombie-themed after a most amusing conversation with Jodie MacArthur and Jim Bronyaur. I hope you'll like it. :) 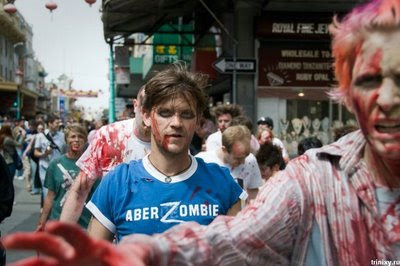 
“C’mon, this is fun! Look at that awesome costume,” replied Silver, grinning to a half exposed brain.


“Besides, you look cute with these unseeing eyes.” She winked.


“Eww! How can you think that someone looks cute dressed up as an undead?”


“Just play along Claire. You might even have some fun.”


These people take great care to make the best costumes they can, I’ll give them that, she thought.

At some point she spotted a different zombie. He was an excellent actor. She couldn’t prevent staring at his walk as he approached her. Her lips twisted up when realizing that she actually
found him cute, which she rationalized into the lack of open wounds in his costume.


When reaching her, he took her arm and said with a rough voice, “I was looking for you.”


“You were?” she replied with raised eyebrows.


“Yes.” He smiled rigidly, and Claire noticed his contact lens. They were the best she had seen so far, chilling even. Before she could control herself she smiled back.


Seeing this exchange, Silver smirked at Claire and let herself go with the mob. Claire rolled her eyes but grinned at her friend’s back. This is what she most liked about her friendship with Silver, very few words were needed.


The zombie guy woke her from her reverie by approaching for a kiss. She froze at the
suddenness, made a minor effort to retreat but changed her mind.


What the heck, she thought, what do I have to lose?


When their lips met, she noticed that his were strangely cold. The kiss was deep and passionate, so she put the thought aside. Suddenly she wrinkled her nose at a putrid smell. Oh, no, this is too much dedication for me, she thought.


She tried to step back but he held her by the mouth. She grunted and pushed him away, which got her a deep cut in her lower lip.


“What the hell do you think you’re doing?”


The guy’s mouth fell, he mumbled something inaudible and stepped back. Then he licked her blood off his own lips and fled, leaving her gawking at the moaning crowd.


Frowning, Claire sped up towards the direction Silver had gone.


The next morning Claire felt a bit feverish. By the afternoon the flu was fully installed in her organism so she left her job early. At night, she could barely call Silver to take her to the hospital. Before dawn Claire was declared dead.


There was an interesting smell nearby she couldn’t identify or locate. She was laid, that she knew, and it was dark. Before she gathered her wits, a thundering sound followed by a cracking wood that let in the moonlight and strong arms, which carried her up, laying her in the cool grass.


“How do you feel?” she heard an oddly familiar voice asking.


Claire cleared her throat and frowned, “Now that you ask, I feel nothing. At all.”


With a loosely open mouth she accepted the mirror he was offering to see herself in grey skin and those well made contact lens.


“Oh, no, no-no.” He shook his head, still showing his once beautiful teeth, “We’re the real thing. Isn’t this cool?” He nodded as to encourage her. “I didn’t want this to happen so soon, but it’s better this way. You won’t feel pain, you won’t feel cold, you won’t even feel the grass prickling your skin.” He twisted his mouth and nodded again, seriously this time.


He leaned back, tense shoulders and confused eyes.


“Who said I didn’t want to feel anything?” She continued, being interrupted by a rumbling sound. “Well, apparently I can feel hunger.”


He smiled and releasing a sigh he happily deposited random body parts before her. They looked quite fresh, making Claire want to salivate despite the impossibility.


That’s the smell I was trying to identify! She thought with a mixture of exultation and disgust.


She looked up at him for assistance. Nodding encouragingly he gave her a female arm.
What the heck, she thought.

Note: The zombie pic I found here, along with many other good ones. ;)
Posted by Mari at 5:30 PM