Note: Warning for gore and some violence. No exaltation of it of course, but be prepared. 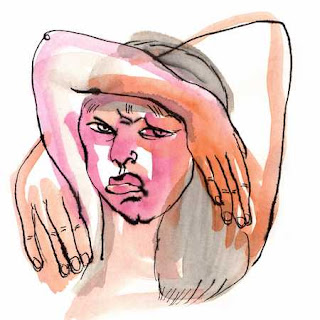 What's It Like?
Everyone else was having fun. She was shaking internally, and drinking. At each filling up several eyes met, narrowing at the inconvenience. She wanted to smack off their yellow smiles.

She was finally getting anesthetized by the alcohol when the cute blondie Maria turned to her, "Say, you're Jeniffer, right?"
She nods.
"So Jeniffer, what's it like?"
"What do you mean?"
"You know..." Maria leans her head in the cutest way she knows, the way even girls fall for.
Jeniffer frowns, "I don't know what you mean."
There's a sudden silence. Maria pauses, unsure whether to press on or not; she sees her best friend's eager eyes and makes a decision; she clears her throat, "You know, to be abused."
"Abused."
"Yes..."
"You want to know how it feels to be abused?" Jeniffer asks incredulous.
"Well, yeah?"
"No, you don't."
Jeniffer stands, carefully holding her cup with both hands, as well as the incoming tears. She swallows them, walks calmly to the buffet and serves herself with another beer, wishing it was something stronger. The memories are back in full swing.
Damn therapy, she thinks, it only works for their own peace of mind. It's all bullshit.
Jeniffer takes her time, hoping that the topic will be dropped. Maybe she should go home, it's not as if she's having a great time, is it?
"So?" she hears from behind.
With tensed shoulders she turns, "I beg your pardon?"
"We're waiting," Maria says, leaning back in her chair, wearing a mischievous grin.
Not a single gaze is diverted from Jeniffer's burning eyes. Most guests shift position, the hostess squeezes her boyfriend's hand searching for comfort. He doesn't squeeze back.
Jeniffer presses her lips together and refrains from crushing the plastic cup. She too makes a decision. She rests the cup on the table, gently, and circles it towards the other girl.
"You want me to tell you how it feels to have someone hurt you so badly that you're damaged for good, that you feel like, like..." She swallows, "No matter."
Jeniffer shows her teeth, pausing to see the effect it creates on her newest friends. When she reaches Maria's chair the remaining smiles are gone, including Maria's. Jeniffer wonders how's the look on her face, ugly, scary, pathetic?
From behind Maria, she leans forward putting a hand on the table and whispers in her ear, "I'll show you what it feels like."
Before anyone can react, she makes room with her left arm, grabs the scared girl by the neck, shoving her on the beer washed table and lifts her pink skirt.
This is when the audience realizes what her intention is. A broad shouldered guy stands up, jumps behind Jeniffer locking her both arms and suspending her. She throws her head back, breaking his nose. Released from his grip, she elbows him in the ribs and puts her right foot behind his left, making a lever and pushing him down by the bloody cheek.
While he grunts on the floor, she grabs a half eaten salami, puts Maria back in place, rips her panties off and touches it on her most sensitive parts.
Holding the salami there, she leans on, "Oh, don't you worry, I'm not going further with this." She smiles against Maria's choking, "Now you'll know what's it like not wanting to talk about something bad that has happened to you."
Jeniffer can't hear anything but the ringing in her ears, although she knows that all breaths are held. She releases the girl when seeing her tears flow.
"You wanted to know how it feels to be abused, as you put? Multiply this one moment by, say, a thousand, and you won't be even close to the sensation of being raped, tortured and starved for the eternity."
Jeniffer takes a deep breath and turns to the open mouthed birthday girl, "It seems I'm not a good company just yet."
To the party's bulged eyes she adds, "Maybe never?"
With a bitter smile, Jeniffer circles the table back to the far couch where she left her purse and heads for the door.
"Wait," Cathleen shouts, "you just kicked Little John's ass. I didn't know you could do that!"
Sliding the door open Jeniffer answers, "You didn't think I'd go through all that and not take self defense classes, did you? Happy birthday."
Note: The "Woman Frowning" I found here, and the artist's page is this. Pretty cool things in there. ;)
Posted by Mari at 2:38 AM