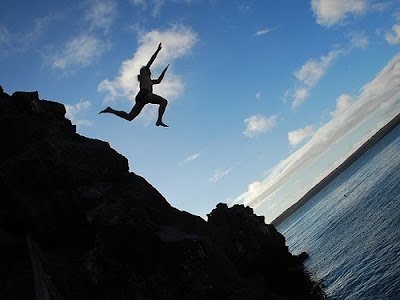 "I can't do this," Wilfred whined.
"What do you mean? After a five hour bus trip my ass is squared. You've got to jump."
"Jeff, I told you I'm afraid of heights."
"That's the point of all this you moron! You've got to stop being such a wuss."
"I'm not a wuss," Wilfred mumbled.
Putting a hand on Wilfred's shoulders Jeff said, "Look, everybody says that the best way stop being afraid of something is confronting your fears."
"Confronting your fears..." Wilfred repeated, as to reassure himself.
"Yeah, now jump."
Wilfred crouched to peek at the deep blue below. "This is too high. We should find some other place."
"No. It's high enough and the currents aren't dangerous here. You'll be fine."
"You know I don't swim well," he said looking up.
"I know, that's why I'll jump right after," Jeff said, pointing at his lifeguard badge.
"I have to do this."
Jeff grinned encouragingly.
With a pitiful smile Wilfred asked, "If I jump, will I be able to finally get a girl?"
Jeff refrained from snorting, "My guess is that you'll have better chances, since you'll have more confidence in yourself."
"Ah."
Wilfred got up, stepped back and said with a trembling voice, "I'm going."
Jeff crossed his arms and nodded.
Taking several deep breaths to gather all his courage, all his manhood in this single act, Wilfred frowned. Right after his shoulders slumped, "Let's just go home."
Jeff marched towards him, passed a tanned arm around his shoulders and strolled back while whispering fervently, "Come one Wil, you're a good looking guy, you can get all the girls you want if you change your attitude."
Wilfred looked up, "Good looking? Are you insane? Look at my belly."
"We can work that out later. Lots of... err, big guys get girls too, think of Charlie."
"Fat Charlie? He takes them by force."
"Right, bad example. My point is that you don't need my kind of abdomen to get laid," Jeff said, stopping at the edge.
Wilfred looked up to his older brother with the doggie eyes Jeff knew so well and opened his mouth to speak.
"Sorry bro, this is for your own good," Jeff said, and pushed him.
*
Well, this was my first challenge for #StoryCraft twitter chat, which this week is focused on dialogue.
I hope you enjoyed this little tale about bravery and tanned men, heh, and will join us next Sunday at 11pm GMT (5pm EST) to discuss the craft of writing. Psst, this is not public knowledge, but I've heard there'll be a special guest next week. ;)
Note: That awesome picture I found here. It was taken by Eric Chan.
Posted by Mari at 11:50 PM