Edited to add: Except for the list of entries and the gratefulness for the people quoted here (check them out!) the dates and voting system have changed. For more information click here. 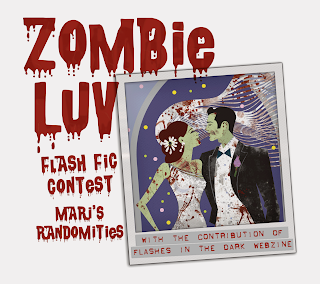 That's it folks! The winner will be announced on July 15th, so stay tunned! ;)
We had 37 entries to the contest, so I think I can call it a success? heh
Thank you everyone for your awesome entries, for all the tweets and shout outs, and for your hilarious zombie-talk.
A special thanks for these people who kindly helped spreading the word about the contest in their own special way:
>> Jodi McArthur, of Fiction Author Jodi McArthur, for her awesome blog post.
>> Joanna Penn, of The Creative Penn, for a most generous tweet.
>> M. Jones, of Zombie Romance webzine, for her enthusiasm and shout out about the contest.
>> Jon M. Strother, of Mad Utopia, for sharing the news to the awesome #FridayFlash community.
>> Anne Tyler Lord, of Don't Fence Me In, for featuring the contest on her weekly writing news, the Coffee Klatch.
>> Roland D. Yeomans, of Writing in the Crosshairs, for being such a gentleman and spreading the word about the contest on his blog. Roland, I forgot your twitter name! *head on desk* Please tell me on the comments (or elsewhere) so I can add a link? :)
>> Chris Allinotte , of The Leaky Pencil, for his hilarious zombie adds.
>> Jemi Fraser, of Just Jemi, for her kindness on twitter.
>> Jason Warden, of Experimental Muse, and Shane Benavides, of I Amuse Me, for being such good sports. :)
Soo, I had much fun, but it's time to get me and Randomities back to life.
"What? You can't undo death!" you say.
Of course I can't!
However, since I know some very powerful wizards -- who you'll get to know on the zombie dragon series ;) -- I've asked them to work on a potion or spell to help out on my condition. These guys are good!
I took the potion just after midnight GMT (as per instructions) and after some weird stuff happened all my limbs are perfectly attached again and I can actually breathe! Hurra! heh
See how Randomities got its looks back? The wizards said that unzombifying Randomities was much easier than making my concotion. *grinz*
Now that I'm alive again and I can think better, it's time to get to work on judging the entries.
Hey, why don't you help me out?
I've mentioned that there'd be an honorable mention published here at Randomities, right? Tell me which is your favorite entry and influence the judges opinion on the honorable mention!
Since I really want to know your opinion, the pool will be up until July 14th, midnight EST. There are so many good stories that you can vote for more than one entry. ;)
Here's the list of entries. Happy reading! ;D
-- Forever, by Angie Capozello
-- At the End, by AJ Brown
-- Island Nights, by Laura Eno
-- Love After Death, by Joanie Rich
-- Romeo and Juliet are Dead, by Tony Noland
-- Heartless, by Monica Marier
-- And Then There Were None, by Emma Newman
-- Three Steps, by Tomara Armstrong
-- Scent of a Zombie, by KeMari
-- Love is Just Another Weakness, by Mia Hayson
-- Dead Flames, by Angel Zapata
-- Lloranda, by David A. Hernandez
-- Advantages, by Rebecca Thompson
-- Burning Zombie, by Erin Cole
-- Yes, by Casper Wood
-- Light, After All, by Mark Antony Crittenden
-- Cooties, by Donald Conrad
-- Rose, by Delia
-- Undead Love, by David G. Shrock
-- Gonna Fucking Do Ourselves In, by Lee Hughes
-- Chained Love, by Eric J. Krause
-- A Small Misunderstanding, by Gracie Motley
-- Benching a Wolf, by Cathy Olliffe
-- Tainted Love, by Melissa L. Webb
-- For the Love of Mike!, by Sam Adamson
-- Something Not Hunger, by Matt Merritt
-- The Tell-tale Beat, by Nishida C.
-- Til Death Do Us Part, by Stefanie Howerton
-- All-consuming Passion, by Barti Ddu
-- The Lovely Tale of Toothgroan, by Nathan Dean
-- The Balad of Nate and Carla, by David D. Sharp
-- Chick-Chick-BLAM: A Headshot Love Story, by Gabriel Gadfly
-- Leaving Gary, by Jason Beymer
-- Marrying the Dead, by Lexx Clarke
-- Charcoal Muse, by h.lee
-- Dead, Long Dead, by Tim King
-- The Forgotten Thing, by C. Dominique Gibson
Posted by Mari at 12:02 AM