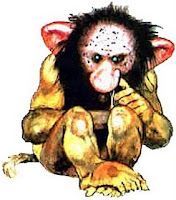 This is the second installment of the Troll Serial. To read from the beginning, or to find past and future installments, click here.


She dropped on her knees, pressed her hands together and prayed to Holy Mary, letting her tears follow the rhythm of her words. She then feasted like the small and fragile wild animal she’d become.


Her golden-white curls were tied behind her head, but it wasn’t enough to prevent the dishevelment on her hair. Oh, how she missed her mother’s quick work with the brush! She promised herself that she’d never complain again if mother were harsh on undoing the knots that her thin hair frequently produced. Aimee’s dress was ripped in several places, she’d lost her shoes and the basket she should be collecting wood with, when she got lost.


She had lost count of the days and nights of hunger and thirst. Only because of St. Mary’s protection she had been ignored by the wandering bear on the first day, and the trolls that almost squished her sleepy body like a bug the night before.


She raised her head to the sound of water. The fruit’s juice wasn't enough to satisfy three days of thirst, so licking her black stained lips she walked towards the sound. She would run if she had the strength to, but she felt too weak. She had always been the skinny one, the delicate girl that would become a lady some day.


As the sound grew closer she accelerated, surprised to find herself sprinting uphill when discerning the scent of the river water. She never thought she’d salivate when seeing a cascade. Tripping and falling, Aimee threw herself in the margin, drinking avidly. She washed her hands and her face and smiled to the dancing rainbow above her head. The day was warm and the cool water was inviting, so she took her clothes off and untied her hair, splashing the water like a little girl. Letting it carry the weight of her body Aimee closed her eyes, her strained muscles relaxing.


A thought startled her. What if there were people watching her? She covered herself with her hands, her chin kissing the water. She scanned the surroundings, seeing only trees, stones, and— Oh no, two men!


She took a deep breath and went below surface like the boys did in the early days. She arrived at the opposite margin, glad that the men hadn't noticed her. One was looking down, and the other had his back turned to her.


She cocked her head. They were very still indeed, these men, and they seemed oddly large. Not bothering to dry herself, she got dressed with her eyes fixed on them, noticing how well they blended with the stones behind.


Are these statues? She thought.


Cautiously, she climbed the hill and crossed the stream above the waterfall, hiding behind the high stones that had protected Kutril and Katran the night before. Kratan had his chin on his club; he was looking at Kutril’s feet when the sun rose. Kutril was looking up, at Aimee’s direction.


Aimee laughed out loud; what a silly girl she was! These weren't men at all, they were trolls made into stone.


There was nothing to fear, so she circled the rock, climbing down to where the stone trolls were, and gave a good look at them.


Their non-human features conveyed not the horror of her childhood nightmares, but a deep sadness. She felt sorry for these poor lost souls. She would practice compassion, she decided. If they didn’t look this ugly, maybe God would receive them in His arms. St. Mary would be proud of her. She smiled to herself, hoping it wasn’t too late.


Aimee set to work at once. She made garlands and placed on the statue’s heads and shoulders. She took quite a while to find sufficient flowers to their large heads and shoulders so when she finished her task the sun had passed its peak hours ago. Famished and exhausted, she fell asleep between Kutril’s feet.


*
<< Back to episode 1                   Go to episode 3 >>
Go to the beginning
Note: John Wiswell wrote one of his Bathroom Monologues about trolls and ogres. If he's right I'm afraid I failed to meet the writing challenge, as my trolls would be actually ogres. (dumb-dumb and all) I'm no mythology expert, but I'm really curious about it, so if you'd like to share your own knowledge on the matter, I'd really appreciate it. :)
Posted by Mari at 12:02 AM