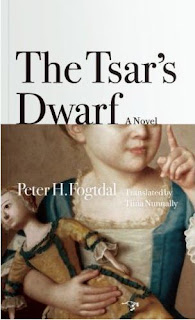 Sørine Bentsdatter stopped growing at the age of six. She's a dwarf, a small and deformed inhuman creature that has decided to hate everyone and everything, including herself.


In this historical novel we follow Sørine from , to , and back to , witnessing her misfortunes while transiting between filthy holes, sovereigns' courts, hideous exhibitions, and fine folk's households.


It's impossible to escape the word grotesque when describing this novel. Ugliness permeate the whole story; it's in the dwarfs' deformities, in the human beings' cruelty, and in Sørine's strange forms of love.


There's beauty in it, though. It's in the protagonist's sharp tongue and quick mind -- which made me chuckle throughout the reading -- in her peculiar tenderness, and also in her questioning mind that demands us to reassess our relationship with god, our humanity, and our self-image.


Sørine is not who or what she think she is; but aren't we often deceived by how we picture ourselves, and our actions?


Although I had a bit of a hard time adjusting to the narrative, as it's in the first person, present tense, the story flows well from the beginning to the end, so the initial discomfort eventually vanishes, much as Sørine's ghosts.


The Tsar's Dwarf is an excellent reading; it's entertaining and humorous, yet deep and challenging, making an irresistible combination.


Note: You can read Peter's hilarious and cutting opinions about various topics on his blog, or talk directly to him on twitter; which is where I came to know him and his work.
Posted by Mari at 11:24 AM