In continuation to Laura Eno's Week, I present you a story featuring no one less than Laura Eno herself!


For a better enjoyment, I suggest you also read her interview here at Randomities, and her answers to the Bernard Pivot Blogfest.


Laura's week will close up with a review of one of her books. Stay tunned!


The title of this story was inspired by John Wiswell's series of flash fiction on Batman's Joker, called "Possible Origins for Him." They're a literary treat, so go check them out afterwards! Thanks for allowing me to use your concept, John!


Finally, there's some good old cursing in this story. Purists, be warned.

Possible Origins for Mr. Fluffy. 1.
There she was. I could see her dream from above, the only solace this restless woman had in this uncertain period of her life.

In her dream, she was twenty years younger, her hair was long to the waist, bundled up to prevent distraction when shooting with the laser gun tied to her thigh. She was beautiful, confident, and tough as nails. The ship shook by an explosion. She slid easily to the side, used to change fighting stances on heels, her dress gliding against her skin as she pressed her back to the corridor’s wall. A shadow approached from where she had come. She shifted weight and unbuckled her gun. It was a human, that she could tell, but it was impossible to know if it was friend or foe. Another explosion. The man took advantage and showed himself, pointing a gun at her. “You idiot!” she shouted, and jogged toward him. “You almost got both of us killed!”
Almost there.
He grabbed her arm and dragged her in before she could react. She met his chest with a huff and they locked eyes. His sardonic smile gradually approached her mouth.
There. I made my presence noticeable and she woke up, heart pounding.  I wasn’t surprised at the creativity of her cursing in response to my timing. I had prevented her from kissing Han Solo, after all.
She made a conscious effort to calm down in the semi-wake state she couldn’t shake herself off. The chill I left in the air made her uneasy. I could see her mouthing soundlessly “What the fuck?” in the darkness. I chuckled at that but she didn’t hear me. It was yet too soon.
As she lied in bed unable to move, I made myself visible. What form would I take? I wondered. How amusing! I took the form of a translucid head, floating above her. As I passed over her, turning like a football, my inexistent skin decomposed until there was nothing but a skull left. She watched in dismay as I crossed the wall behind her bed like a classic Ghostbusters’ specter and left to the other side. I grinned a satisfied lip-less grin. This was going to be fun.
The first contact was made, so I kept observing her in search of an opening. I saw her dragging herself out of bed, feeling cold from the inside out. As she brushed her teeth the memory of her dream slipped away into her unconscious mind. She tried to hold onto it, knowing it was something she’d dearly want to remember, but the impact of the first contact was too powerful and she could only replay my decaying in her head.
Coffee made everything go away. The day was sunny and she had a bright future ahead of her. I sighed as her shoulders slumped at the doubts and fears gurgling in her mind. She had no idea of what to do with all that brightness, or how to find a new way of quieting the voices in her head. She wondered if her neighbors were right and she was indeed crazy. I snorted at that thought of hers and poked her. She shifted in the seat, staring at the kitchen’s white wall. She blinked, deciding to do something about all that white in her house, losing the idea that was forming in the back of her mind in the process. I shook my head. She mirrored my reaction and set to make lunch to put her frustration aside. Her spirits lifted somehow then her husband arrived. I sought an opening but her guilt for his doubled effort in coming from and to the office for lunch blocked me out.
Her waking was the only opportunity I had to strengthen the connection, so every day for the next two weeks I’d make my presence undeniable. I’d hedgehop toward her head, take the appearance of her cat, maddened and reaching as if to attack her, or I would simply float above her. She’d wake up sweating, her chest tight and cold.
One day, she woke up with a jolt, hitting her head on the night table and missing her left eye by sheer luck.


“Shit! I’m sick of it you, you son of a bitch! Go haunt your fucking own mother!”


So, her wake-self had bones as well, eh? I chortled merrily for this new knowledge of her. She froze in place and frowned.


“Okay you fucking moron,” she shouted to the walls. “I’m through with you. If you think you can scary me, you’re downright wrong! From now one you’ll be Mr. Fluffy. How’s that for a pitiful ghost, eh?”


I was astounded. So she thought I was a mere ghost? As I left to consider my options, she added half-heartedly, knowing I was gone, “I’m bringing a fucking priest if I have to, you hear me?”
I decided that despite her misunderstanding of my nature and purpose she was worthy of some persistence, so I intensified my efforts showing up every day and taking all opportunity I had to make my presence felt. She’d then wake up in the middle of the night and curse me under her breath, drawing a smile out of me, or a chuckle. But this was getting tiresome for both of us, so I gave ourselves a night of rest and prepared myself for a dramatic last try.
Instead of the skull she had envisioned for me, I forced my visual manifestation to look similar to an upper body. I dove in with stretched arms, ready to physically shake her off her lethargy. But she woke up, jumped out of bed screaming, stepped in her cat’s tale and ran over her daughter who had come for a visit, worried about her haunting tales.
I was hovering over in the kitchen, resisting giving up although I knew I wasn't able to conceive another solution at that point. She explained what had just happened while preparing coffee with trembling hands. Her daughter asked about her eye, which was healing quite well, and they fell into silence. A sigh was the sign for her daughter to suggest a walk. It was a gorgeous day outside. After a quick shower they left by foot and I followed suit, hopeful for the new openings a different and relaxed environment would create.
Letting themselves bathe in the warmth of the spring sun, they talked, laughed and on their way back home she felt renovated. There, I had full contact now!


After her daughter left, she frowned at the living room wall. Later that day, Laura wrote her first story. After she finished it, she gazed at her garden through the window and smiled at the sound of my laughter. “Fuck you, Mr. Fluffy.”
As she pronounced these words, I noticed pink tentacles sliming themselves out of under the bed.
*
Cue: No one knows how Laura and Mr. Fluffy came to know each other -- and I suspect neither does she -- so I thought I'd be fun seeing other people giving continuity to this speculation, hence the "1" indication. I'm sure Laura would like it too. ;)


John only asks us to keep the title's concept and punctuation, as well as the stories in first person. Otherwise, have fun! 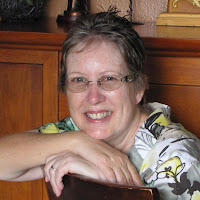 Laura Eno lives in Florida with a very tolerant husband, three skulking cats and two absurdly happy dogs. She has a pet from the Underworld named Jezebel and a skull called Mr. Fluffy who help her write novels late at night. Please visit her strange imagination at http://lauraeno.blogspot.com