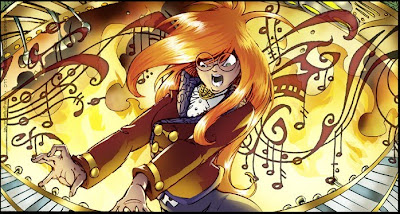 When I was a little girl (please bear with me) 90% of my friends wanted to be ballerinas when they grew up. Do you know which were my aspirations for the adulthood? Well, I wanted to be either an astronomer, to watch the stars, or a mad scientist, muahahah!
No, I was not a deranged child who wanted to conquer the world or something; I wanted to invent cool things, like Gyro Gearloose's, from the Disney’s Duck Tales.
Well, imagine my reaction when a witch friend of mine (or former witch if you will) recommended me a steampunk on line comic? Er, I actually scorned at it, as back then I was prejudiced about stuff published on line, and freely distributed no less. 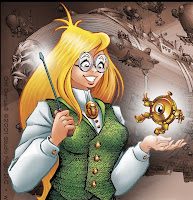 I was so wrong! When I decided to take a look, at the Girl Genius Comics I couldn’t stop chuckling! (I wasn't laughing out loud and rolling on the floor, only because it was past and this is not a reasonable hour to make noise.)
Seriously, the comic is so good that it had me literally clapping hands at some point. Plus, they won the 2009 Hugo Award for Best Graphic Novel (or Graphic Story, as they call), which is huge!
Right, you already know what steampunk is, you read and love Girl Genius Comics, and you're bored to death... Wait! Here's an extremely cool site you may like (former-witch friend found through Neil Gaiman, no less); you can read some steampunk stories here; there are some awesome steampunk gadgets here; and here's the site of a steampunk workshop! I hope these caught your attention. :-)
Now, if you, on the other hand, had never heard of this steam-thing, here's some interesting (and concise) info: 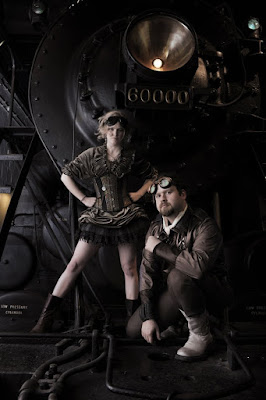 Steampunk is a genre of speculative fiction usually set in an alternative Victorian or Erwardian world, frequently filled with fantastic elements, where advanced technology is steam powered.
Satisfied? But there's more!
Clockpunk is a steampunk subgenre in which highly technological stuff are based on clockwork mechanisms in pre-Industrial Revolution settings. They generally exclude steam power; so extreme Da Vinci's inventions would make a good picture of it.
Dieselpunk is also a steampunk subgenre in which ultra technological things are powered by diesel and eventually nuclear power, in a 1920's to 1950's setting.

Finally, if you got interested in this steampunk thing, here are some suggestions of readings, "watchings", "playings", and (believe me) "listenings" on the genre:
Some books, starting with the classics (always!): 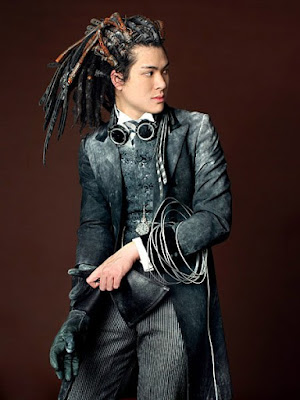 Never forget the comics: (If you've scrolled till down here, open your mind, will you?)
and obviously
Steampunk-ish animations:
I'm not into games, but was told that these are good:
Did you know that there are steampunk bands out there? Me neither; just found out about them:
To wrap all up, here's an extensive list of steampunk works I found on "master" Wiki.
But hey, if you now some other good steampunk thing you'd like to recommend, please do so! I do want to increase my reading, watching and listening lists! :)
Note: No, I did not forget to give proper credit for the wonderful pictures you saw up there. The first one, with the couple, is from Kyle Cassidy; the second, with the hot guy, is from Nadya Lev. They're both spectacular photographers, so why don't you go pay them a visit? ;-) Ah, of course all Girl Genius illustrations came from free stuff of their website.
Posted by Mari at 9:04 PM