This is a writing challenge suggested by my twitter friend @JSterlingS, which theme is "falsely persecuted non-evil trolls". I hope you'll have fun. :) 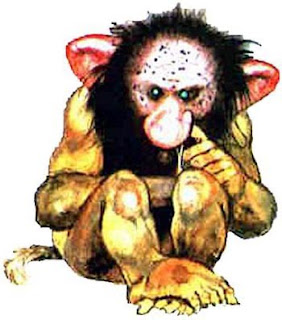 They ran as fast as they could, their long legs surpassing the mob's rage. They climbed the hills near the village; sprinting through the deepening forest they arrived at the woods where rocky walls and high waterfalls hid them from the peasants. Panting, they arrived at a small clearing with the river a few meters away. They set to rest, listening to their rumbling stomaches.
"I don't understand," mumbled Kutril after the two of them gathered their breaths, "we were just after the goats."
Kratan shook his head sadly. He scratched his skull and snapped his fingers. With an enlightened grin he motioned Kutril conspiratorially to approach him, but they didn't measure the distance well and hit their heads against each other.
"Once," Kratan whispered, massaging his forehead, "I heard a villager talking to another. There was a big word I can't remember."
He banged his club against the nearest rock in frustration, making the ground shake.
"Idiot." Kutril snorted. "Big words have no use to us, and you shouldn't make noise."
"But this one was important," insisted Kratan with a whining voice, "it started with a 'P', I think."
"A 'P'?" asked Kutril, puzzled.
"It's a letter you moron, from the alphabet."
"Alpha what?" Kutril asked in awe.
"You know, those signs humans use to put words on paper."
"Ha! I knew it!"
"You did not," said Kratan, leaning forward, holding his knees.
"I did too, dumb-dumb who doesn't know the difference between a goat and a stone."
"That was an accident! How many times do I have to say that it was too dark that night? There was no moon and the sky was cloudy."
"Yeah, this is what you get trying to eat a goat alive. Don't you know what these are for?" teased Kutril, swinging his own club fashionably.
Kratan's shoulders hunched and Kutril continued with his favorite teasing game, "Your goat got you a week in bed. I still don't know how you got that out of you."
He laughed at his own joke, just as he did every day.
"It was supposed to be a big goat," said Kratan, pouting.
He didn't even try to explain anymore how its form was so similar to the real thing, and how hungry he was that night. He crossed his arms and turned his back to his friend.
Kutril was abashed; Kratan has never reacted like this before. Not knowing what to do he looked at the waterfall. Illuminated by the moonlight, the distorted moon looked like a dancing woman with a fluid transparent dress.
He dozed a bit, lost in a thoughtless moment. Looking back he saw Kratan's large ears and his moving shoulders. He let his head fall to his chest, remaining like this until a memory came to mind.
"Hey Kratan, did you know I heard the humans talking too, just yesterday?"
Kratan looked over his shoulder with watered eyes. "You did?"
"I did!" Kutril smiled broadly. "It was something about a girl."
"What about the girl?" Kratan turned to face his long last companion.
"I didn't understand everything, but I guess they miss her."
"Her family misses her?" Kratan sniffed.
"Think so." Kutril nodded. "But there was more, they were talking about trolls too."
"Trolls? What do we have to do with it?"
"Dunno."
"Maybe they want our help to find her?" said Kratan, with a light of hope in his eyes.
"I don't think so," said Kutril with a fearful voice. "Humans don't like us, you know?"
"I know you idiot. I'm just thinking."
"Hey! Now you're the one being cruel!"
"Sorry?" said Kratan with trembling lips.
"That's okay," said Kutril. He looked up to the hazy sky and added, "Anyway here comes the sun. We'll have to talk tomorrow night."
And they were both transformed into stone, with empty stomaches and puzzled minds.