The other day I was on Twitter and I caught @Cafe_Nirvana, @techtigger, @deannaschrayer, @AnneTylerLord and @RandomOenophile talking about tomatoes. Yup, we writer-ly girls talk about more than books and such; we like wine and food too, and a lot! heh 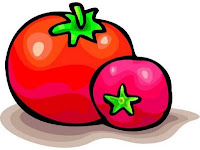 @techtigger shared a recipe that uses lime on the tomatoe sauce that got me intrigued. We both agreed it could be an interesting ingredient as long as used with care, otherwise its taste is overpowering.
I threw the idea of my family's recipe for the famous tomato sauce and everyone got excited; even a tomato blog tour was mentioned, but we decided to drop the idea. :P The next day @deannaschrayer wrote a great post with pics of her tomatoes and beautiful garden that clicked it for me, tour or no tour. ;)
So, I proudly present the recipe for our tomato sauce base, to which I'm going to suggest some spices and stuff to increment and make whole different culinary experiences.

Make no mistake though, my family's sauce is nothing like this picture. However, if you're one of those people who like tomato's taste but not its texture, so you won't have any other kind of sauce, do stick around. At the end I'll tell you how to transform my sauce in your sauce, keeping my family's culinary secrets intact. ;)
Base for Tomato Sauce
3 to 4 portions 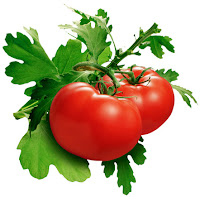 1. Do not peel the tomatoes. Wash them very well taking all precautions against parasites and the toxic stuff they put on crops. (unless you're smart enough to use organic vegetables, in which case wash them normally, no concerns here ;) Take their top off, cut them in large pieces (four to six is good enough) and put them aside.
2. Chop the onion and garlic as small as you can, or if you prefer use a food processor.
3. Warm up the oil, fry the onion and garlic until they become golden, mixing all the time to prevent them burning and sticking to the bottom of the pan.
4. Add the tomato pieces and mix. You'll see that the tomatoes' water will come out because of the heat, so you won't need to add water.
You can add the salt in this moment or later, but if you add now, at the beginning of the cooking process, cut the quantity by at least half or the sauce will get too salty.
Let the tomato cook in low fire with closed pan. Mix it from time to time until the sauce becomes more or less homogeneous. Open the pan to evaporate when it happens. You'll know when you've reached the right cooking point when you can't see water between tomato pieces.


This is more or less what you'll get:


Now, if you prefer the homogeneous sauce I've mentioned, you can put it on the blender or equivalent kitchen appliance, and let it cook for a long time. While our"rough" version will take around 45 min, a "clean" one will take several hours. You'll also need to add water once in a while, otherwise you'll end up with a dirty pan and almost no sauce at all.
As for incrementing the basic sauce, here are some suggestions:


An observation is in order: we like to experiment with spices, so if you're brave enough you can try adding all three suggestions, or a combination of two. The sauce of the picture above had basil, rosemary and salvia, and it was delicious! However, please keep in mind that depending on the region you are, salvia can be very strong tasting. In this case you should add much less of it and I'd not recommend such mixtures.


This is a fantastic variation that we use a lot! I don't have a picture today, but if you'd like to try it on, please post a picture on your blog and let me know how it went. :)


We usually make lots of base sauce and freeze it, so when we need it all we have to do is add spice and we're done. Actually, the base sauce is quite good on its own. ;)


Finally, if you don't like onion and garlic for any reason you can try to replace it with asafoetida with almost the same effect. If you take them off completely you'll change the recipe in an irremediable way.

So, making tomato sauce is much easier than one might think, eh? They won't even bite you, heh.


What do you think? Will you try it? Please tell me in the comments. :)