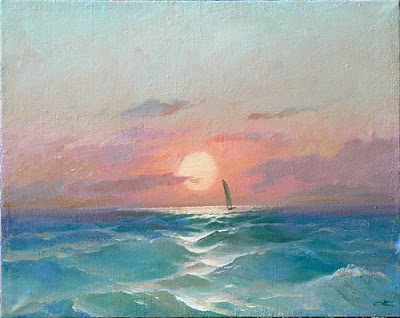 I'm reading Cape Wrath to Finisterre, by Björn Larsson. This is not a usual novel, like his famous Long John Silver; it's more a collection of thoughts and reflections. This book is so rich that in the third chapter I had to stop and write this post.

Larsson's life circles around the sea, his travels, and of course, his writing. He met many people in his wanderings: a guy who wanted to build his own boat; a man who worked on a nuclear submarine spending six months under water, and when he came out he'd say that the surface reeked of putridity; an Irish couple who lived a very simple life and were happy, he was the type of sailor who would go out for a "ride" in a storm that kept everyone else at home; a captain who had a heart attack the day after paying Larsson and his wife a visit, clad in full uniform to honor the couple's nautical abilities, and whose faith is unknown, as of numerous other friends they have made on their traveling.
Reading about these people who live by and for the sea, casting anchor only to gather supplies for their journey, triggered a frequent contemplation of mine.
Once again I come to realize how many worlds there are in our World. 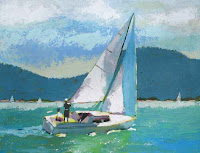 We hear frequently about the "sea people" -- sailors, travelers, merchants, etc. -- but we never get to feel what their life is like. In this book, there's a hit of that feeling, which is one of the most precious things to me, because these fleeting impressions can teach us more than many believe. 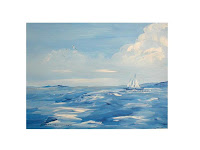 You can learn a whole different way of seeing life, of thinking, an unlike set of desires, fears and goals. You get to feel it too. I could almost smell the scent of a storm by his description of a moment in someone else's life; I could feel the urge of moving forward, never remaining in a place for long --even though my personal needs are diametrically opposite -- I could taste the salty wind in a bright day.
His tales also brought back the memory of my own encounters with people of various cultural backgrounds: a friendly man who lives in Eastern Island, where the natives still live by the standards of their ancient culture, with hints of modernity provided by television, alcoholic beverages, and internet; a black man with the hardest gaze, filled with suffering and danger; a Japanese man who fell in love with a foreign land where he felt free, but had to go back to his own country for not being able to get a visa; Chinese people and their sons and daughters born abroad, who struggled to live by contradicting codes of conduct and honor; an Italian family who lives practically the same life of their ancestors, although being in the 21st century and benefiting from its technology. 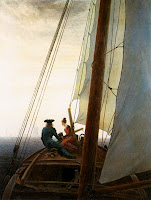 Each of these people live in their own world. My world is not that of deep waters and passing shores, the world of a native from Easter Island is not the one of bucolic and static landscapes (although their scenery is gorgeous), the world of a refugee is not the one same of a man of the country he immigrated to.
What conclusion do I reach with this? That every and each of us see things from a singular perspective. We're the same, yet we're unique.
I don't know about you, but I want to be introduced to as many cultures and viewpoints as possible. I want to feel their viewpoint, not only understand it. Since I'm not the nomad type of person, I read, I talk to people, and I observe. And of course, I write about it.
Now, why don't you tell me about your own world? 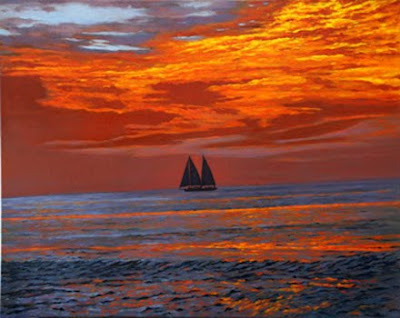 Note: The painting are these, in order of appearance:
Lonely Sailing Ship, by Peter Pavlov
A Sailing Boat off Deal, by Joseph Mallord William Turner
Smooth Sailing, by Robert Bisset
Sailing Boat, by Ginger Lovellette
On The Sailing Boat, by Caspar David Friedrich
Sailing at Sunset, by Lissa Friedman
Posted by Mari at 1:30 AM