Book Review - The Ainu and the Bear, by Ryo Michico 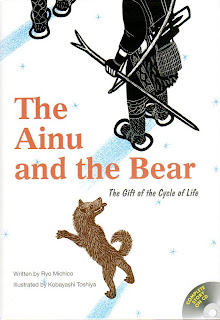 The Ainu are the indigenous people of northern Japan, mainly the Hokkaido island. They are semi-nomad hunting and fishing people that also cultivate the earth and have the unique view that our world is much more attractive than the one of the gods, which is why they visit us frequently, disguised as animals, plants and even tools.
There are the owls, the gods of the villages; the dolphins, the gods of the sea; the trees, the gods of the earth; and the great bear, the god of the mountains, which is the most important of them, along with the goddess of fire that protects each home. [1]
The Ainu and the Bear is a children's book that tells us about one of those visits, alternating between the bear's and an Ainu boy's point of view.
A small cub is taken away from her mother in her very first days of life to live with an Ainu boy, her protector. She grows up with him, creating a deep bond that is severed when it is time for the bear to go back to the land of the gods. The boy grows into the old and wise man who will teach the youngsters of his village an important lesson:

Every grain of millet, and every piece of meat and fish, contains the life of another.

We feed on the life of others. (...) We all partake in the blessing of the cycle of life. 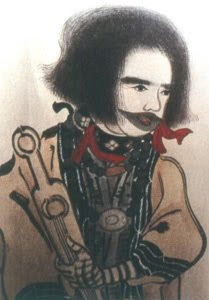 This is a valuable lesson for all of us, children and adults equally, as it teaches us to respect the food we ingest. Being carnivorous, omnivorous or vegetarian, everything we ingest, industrially processed or not, contains the vital energy of another living being. This is the cycle of life we disrespect when we raise the animals in the poorest and cruelest conditions, when we torture and kill them without respect or consideration, when we poison our crops.
I gave the book for a ten-year-old English girl to read, fearing that she wouldn't finish it. I was surprised to know that she liked it, although she felt sorry for the bear when it was ritualistically sent home. (iyomande) I believe the book's lesson is so true that it resonates with a deeper part of us, which is why the girl accepted the difficult elements of the story so well.
The translation to English -- by Deborah Davidson and Owaki Noriyoshi -- is fluid and well written. It is clear that it remains faithful to its original language, being all the while accessible to people from a Western background. The illustrations -- by Kobayashi Toshiya -- help setting the ancient Japan atmosphere as well as the story's understanding.
I found particularly compelling the description of the boy's feelings throughout the bear's life, especially when he witnesses her demise. It is soothing to see how he learns to deal with these feelings while interacting with the nature in a positive and respectful manner.
The book comes with a audio CD containing the narration of the story and two live recordings of ceremonial chants. (Iomante upopo) Both me and my little friend found the audio boring, although all changes of intonation were in the right places, and she laughed at the strangeness of the chants, a natural reaction to a first contact with such a diverse culture.
I would recommend this book to every parent who wants to raise a highly aware human being. However, I wouldn't recommend it to an unprepared child. My reader is not a common ten-year-old girl, being very mature for her age. I'd suggest that the parents read the book first, take some time to digest it and then read it with their kids. After the reading, a good laugh can be relaxing when listening to another culture's voice.
[1] Campbell, Joseph: Masks of God I, Primitive Mythology, p 273. Edition translated to Portuguese, Ed. Palas Athena, 1992.
[2] You can find much information about the Ainu rites on this website, which is also where I found the illustration of the tattooed woman. You can read more about The Ainu and the Bear at the Project U-e-peker blog.
Posted by Mari at 7:30 PM