And now to another week entirely dedicated to a shiny knight! I present you Kevin J. Mackey's Week, which starts with an interview, as all the other weeks, but will take a different turn until it ends with a book review. Instead of a story, Kevin chose to have a guest post here at randomities, so stay tuned!

In the mean time, learn a bit more about this great writer and poet.

Pink. No, really. Ask anyone. Even my father bought me a pink tie once (well, it was a hand-painted silk affair created by a French artist who lived in Ireland prior to deciding she preferred  the warmth of Provence to the warm Irish people - but even so.)

2. What else is a favorite to you that you feel is relevant?

What else? Good design - in anything and "functional works or art" - which is how I describe my fountain pens.

3. What do you do for a living, besides writing?

Data and Software Architecture. It seems I'm quite comfortable in the abstract world of real-world representation - rather than the real world itself! And what is writing but an abstraction of the real world?

4. When did you start to write? 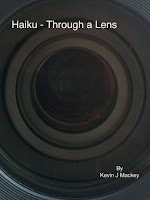 About 12. It was a science-fiction story (mercifully it never saw the light of day). My profession at the time? Brat (there are some who say that's another thing about me that hasn't changed.)

5. Why did you start to write?

The why of it? It seems, even then, I wanted to tell stories.

[Don't miss Kevin's amazing guest post this Friday, when he'll talk in detail about this.]

6. How did writing influence your life?

It provided an escape. A useful thing for an introvert. It's not an escape now, because it's very much part of the world I inhabit.

7. When/where do you write the best?

Most often at night (I'm a night owl like my mother.) But I'm finding I am now writing whenever I can.

8. Which part of writing do you like the most?

9. What's your favorite genre? Which other(s) genre(s) do you write in?

Probably science-fiction. But I don't fixate there and have found I write all over the map (which is another good description of me.)

10. Which is the favorite character you've ever wrote? Why?

Lexi, or "The Destroyer of Worlds Chick", an emanation of Lilith who has shown up twice, here  and here. As to why…who knows? Some of the most powerful people I know as friends are women.

Kevin J Mackey is native Irish but now lives in the far drier climate of the San Francisco Bay Area. He reads widely - "whatever may be found between book covers" - but has a particular fondness for science fiction and poetry. He has had both flash and short fiction published in 2010 and 2011.

He also published "Haiku - Through a Lens", a collection of haiku and photographs on the themes of Light, Darkness, Travel and Seasons. He says he "follows in his father's ink-splotches"